30 Dishes: A Brief History of ESABA 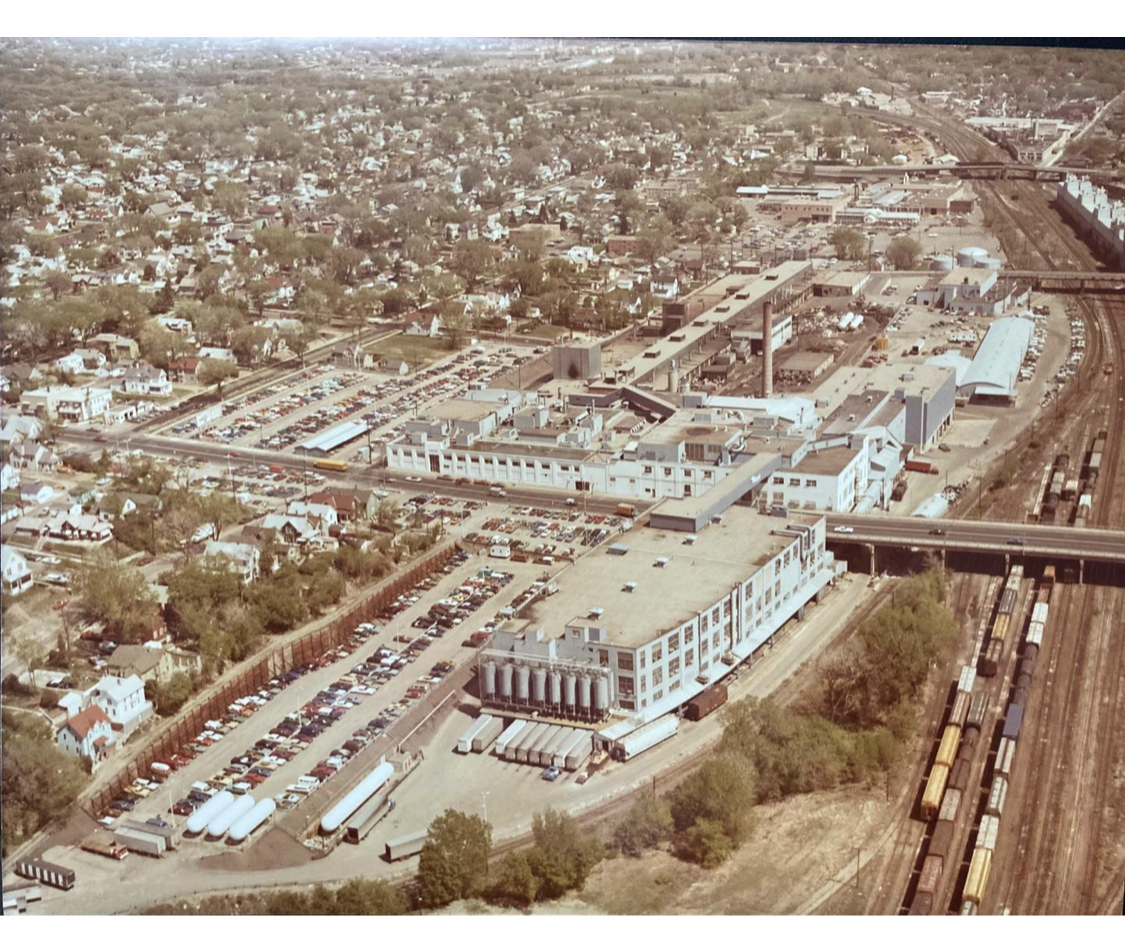 Paris Dunning is the current director of the organization and has been involved for nearly 5 years. With the growing ability for connections throughout communities, this organization is poised as a catalyst for an East Side St.Paul revival post pandemic. In order to grasp what type of impact can be made, we have to understand what has already been done including the evolving resources. Welcome to a summary of the History of the ESABA organization.

Early on in the ESABA establishment there were 5 main corridors on the East Side of St.Paul, MN. In the midst of these corridors of development sprouted a 6th commercial corridor striving to compliment the others and be manufacturing driven. It should be noted that 3 corporate giants (3M’s Headquarters, Whirlpool and Hams Brewery) were all present in this area at one point. The picture accompanying this blog is an aerial of the Whilpool plant at Arcade. We're looking for the photo credit.) By 1990, these big 3 East Side titans had left, creating ripe soil for new establishments to emerge. Enter the Phalen corridor development. But once this was established, funding for ESABA stopped and the brainstorming began. This is where entrepreneurial endeavors were formed. Both for and non profit. A major obvious indicator that this was catered for the underdogs is that the nation's biggest minority groups were sought after to level the playing field. East and West Africans, Hmong, African Americans, Latino etc. communities are only the surface of the diversity inclusion. Ethnicity, business size, and representation are all mixed in involvement for the East Side’s shift from historical places they’ve served towards more regular people starting new things.

In the early 2000’s while ESABA was being established, there was a transition to becoming more of a marketing association as they switched to operating as more of a chamber.  As an entity operating as a Chamber of Commerce, there is more interest in furthering the interest of the businesses involved. Small business owners should love this transition that is still practiced now. This business network operates differently from say the Better Business Bureau because members aren’t bound to the organization in the same ways creating more breathing room. Women owned and family owned organizations are said to especially approve of the support while still having enough wiggle room to pursue other endeavors. Brooke Lee, a long time member of ESABA is an example of a business owner who represents this group. They have been on 7th ave for many years representing the latinx community. Kendles Ace Hardware on Payne and ESNBC are anchoring great development. The goal with this is to create a stronger, better more loving Eastside. This is part of an organization that is really built on love. People do things out of the kindness of their hearts, not threats or unjust incentives by the organization they’re members of. Sanneh is a self named corporation administered by a professional soccer player who returned to the Eastside after their career to help with its development. This was done by contributing to a soccer dome and recreation center to include Urban Roots. Urban Roots has been around for over 30 years. They have also been a member of ESABA since conception. This group has impacted the community greatly.

The first and second president of ESABA were Scott Meuler and Marc Copen respectfully. Today, Scott still runs Party Time Liquor and is an active ESABA member. This illustrates the close ties that being a member of this organization’s comfort creates. These two strived to have businesses integrate and use one another instead of focusing on acquiring already booming businesses. This provided an opportunity for the smaller guys in the industry to establish footing. In entrepreneurship, there are no backseats. Small, medium and large businesses were able to grab opportunities in newly opened market spaces,  smaller ones benefitted the most. At the time, technology was just getting its bearings. This means that the direction of ESABA may involve more virtual networking based on societal shifts. This is obvious to us as consumers and those who are business owners. There’s always a need for networking as a business owner in rural areas. They are, after all, each other’s best assets.

Networking workshops began in the beginning of ESABA, but now there are so many tools to grasp in regards to connecting consumers to businesses. At the time, technology was just getting its bearings. This means that the direction of ESABA has to involve more virtual networking based on societal shifts. This is obvious to us as consumers and those who are business owners. There’s always a need for networking.

There are effective professional workshops conducted that are now posted in ESABA.org. They’ve held seminars and meetings in the past for ESABA, but never virtual until recently. The ability for a more communal connectivity has opened topics like public safety to be discussed for problem solving amongst members. In a recent meeting held, there was a St.Paul police officer present to help clarify as well as address concerns that local non-profit and business owners on the Eastside of St.Paul held in regards to community safety precautions during the Chauvin Trial. The meeting was held via Zoom and attracted over 20 members who were interested in engaging with their peers and community peace officers. Connection between the entrepreneurs shun a trustworthy light on the relationship between officers and the community that they serve. This also happens to be where these businesses reside. In fact, Paris’s involvement in the local food industry is what led him to be most highly considered for full time involvement back in 2016.

Apr 12 2021
Good afternoon,   Yesterday, a man was shot and killed by a Brooklyn Center police officer, a heartbreaking tragedy.   Last night and early this morning, protesters gathered near the scene to make their voices heard. Many were peaceful in expressing their outrage. Unfortunately, some of the activity devolved into dangerous and destructive behavior—som...Continue Reading

Mar 30 2021
St. Paul Keeps with its History By Brittanie Fort, Metro State New Media It’s been a weird year. We can see the light at the end of the tunnel but we still have restrictions in place. Let’s look to the places close to where we work and live to have the adventure...Continue Reading

Mar 22 2021
At our East Side Connect! on March 18th we hosted a conversation with John Perlich and Shannon Watson from the St. Paul Area Chamber of Commerce about the PPP loans from the Federal Government. Our Federal Government has decided not to tax these as revenue but the State of M...Continue Reading
Add to Report View Custom Report